When you cross-examine a witness, you’re generally trying to (1) elicit relevant information, or (2) impeach the witness’s credibility. Key to impeaching a witness is control. It’s usually best, therefore, to ask only those questions to which you can correctly anticipate the answers.

You may attack the witness’s credibility either as a witness in general or in regard to facts she has testified to on direct exam. The witness may be impeached directly on cross-examination, or indirectly through other witnesses or evidence.

The most important types of impeachment evidence involve (1) the four testimonial capacities; (2) prior inconsistent statements; (3) specific contradiction of the witness’s testimony on direct exam; and (4) character evidence (to be covered next issue). Evidence Code section 780 and the civil and criminal jury instructions (CACI 107, CALCRIM 105) tell you what to look for. 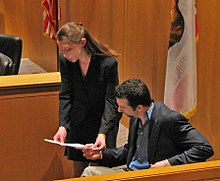 We can challenge a witness’s sincerity in four ways: (1) bias (witness favors one party); (2) prejudice (witness dislikes one party); (3) interest (financial or otherwise in outcome); and (4) corruption (witness compensated for testimony).

Even the attorney calling the witness may impeach with a prior statement. A nontestifying hearsay declarant can be also be impeached with a prior inconsistent statement.

When impeaching the witness through her own testimony, you need not reveal the prior statement to the witness before confronting her with it, but you must, upon request, show or disclose it to opposing counsel. On the other hand, before counsel offers extrinsic evidence of a prior inconsistent statement, the witness must be given an opportunity to explain or deny the statement or have not yet been excused.  EC 770.

A good method of impeaching is use of the “Three C’s”:

Though you may impeach with minor inconsistencies, experienced attorneys usually reserve it for more important facts. Impeaching with minutia looks weak and impolite. Go after the little inconsistencies only at the beginning of the cross-exam to establish control or if there are so many inconsistencies that the witness will lose all credibility.

Specific impeachment. EC 780(i) allows the cross-examiner to prove that any fact testified to by the witness is untrue, regardless of whether it’s relevant to the case or otherwise inadmissible. If the witness raises it on direct exam, it becomes fair game; however, counsel is not allowed to elicit a collateral fact from the witness on cross merely for the purpose of contradicting that testimony with other evidence. So advise your witnesses well regarding what they volunteer on direct (“I’ve never been in trouble before”) and listen to opposing witnesses carefully so you can jump on their mistakes (“On direct you said you’d never been in trouble before? Well, how about …”)

Final argument. Many cases are swearing contests–between witnesses and between lawyers. If you use CACI 107 or CALCRIM 105 when you explain your impeachment to the judge and jury, applying the facts you’ve elicited to elements of these witness credibility instructions, you and your arguments may well end up with the most credibility of all.

Tim Hallahan is Director of the Trial Advocacy Program at Stanford Law School, a Judicial Education Attorney with the California Judicial Council, a national CLE speaker, and cofounder of The Hecht Training Group, a litigation skills training firm. He also serves on the ACBA CAAP Training Committee.

Are you wondering what comes next? How to connect with the legal community? Consider joining your local bar association! At the Alameda County Bar Association (ACBA) you’ll find kindred spirits and a group of lawyers who gather together to impact our community beyond what we can do as individuals.

Our mission is to promote excellence and build community in the legal profession and to facilitate equal access to justice. Membership in the ACBA is a lasting bond between people, and starts at only $30!

For our members, the Alameda County Bar Association brings educational opportunities, networking events, professional development, and a chance to lead and shape the legal community in Alameda County.  We have free CLE programs and benefits that apply to a range of legal professionals, from judges and attorneys, to paralegals and law students.